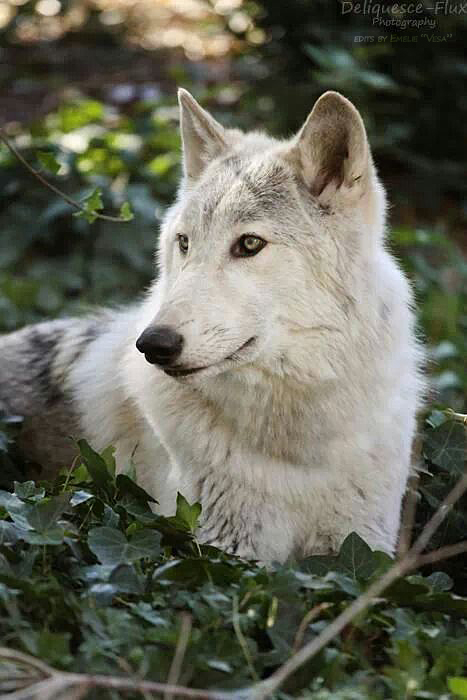 Fur: Diluted silvered saddle
Eyes: Silvery Green
Appearance: Yahaya is like any other Tallis, and stands rather small in comparison to other female wolves. At around 26 inches at shoulder wither, she also is lithe in form at 63lbs. Yahaya's saddle and mask quickly disappeared from her body and left her with a soft silver-dusted forehead and soft white and sienna ears. Her scruff is stark white all the way till her withers which stops with an almost mane-like tuft. The white fades off into a silver and soft charcoal ticking that gives her a shiny silvering effect all the way to the top of her tail where it dissipates into more white. Her eyes are a silver that dazzles green in the right light, and in the dark show their true flecked nature.

Personality: Yahaya is the sort that would prefer to watch and learn. She is a soft natured wolf, that would prefer a yes or no answer over them all. However, because of how she was raised she can be quite a adviser. Yahaya believes that her breath should be saved for the proper things to say, and will probably answer small-talk conversations with body language (like nods, head shakes, shrugs, odd looks, etc).

Special Notes:
- Yahaya is Nes`Ryn and Nahele's younger cousin.
- Her grandparents raised her, as her parents passed away when she was 2 months old.
- She's an old soul.
- Yahaya is allergic to wolf packs. But she will come to be a friend to the NightHunters and she hopes to help lend a paw when they need it.
- The Tallis family live North East of the NightHunters.

Milestones:
February 28th, 2018 - Is born the youngest of a trio of girls.
April 29th, 2018 - Both parents are killed by illegal poachers, the trio are left to their grandmother Nahade and grandfather Ihara.


History
Lyrok and Oka were rather young when they decided to have pups, being only two years of age and on the brink of a season Lyrok gave birth to their trio of girls. Just as the trio were weaned Lyrok and Oka were poached illegally by poachers. Unknowing to what happened to first their son Marrok, Yahaya's grandparents mourn the loss of Lyrok and Oka. Nonetheless the trio of pups were taken in by their grandparents Nahade and Ihara and raised to know family pack workings and nothing else. As she aged, Yahaya learned to be more of the scout and seeker of the family pack while Syren and Novis had become more of the hunters aiding their grandparents.

Yahaya accidentally happened upon the NightHunters pack during their first ever meeting and she continued to watch quietly without disturbing the happenings. Later that evening however, she gets a chance to meet Ren and her cousin Nahele, which spikes confusion.
Top
Post Reply
1 post • Page 1 of 1